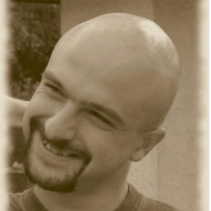 Barış Cansevgisi was born on 18 April 1977 in İstanbul, Turkey. Being an army brat, he grew up (and still growing up) in various locations throughout the World (well, let’s say Europe mostly), which has affected his writing greatly. Starting elementary school in Kingston upon Thames, the UK, he had to change four more schools until he finished his primary education. Middle school and high school were no different as he went to schools in Mons, Belgium and Ankara, Turkey during those years. He graduated from Başkent University in Ankara in the end. Currently, he resides in Ankara, where he works as an English language Instructor at a private university. He speaks English, Turkish, Italian, French and can nod in Spanish.

Cansevgisi’s first sci-fi novella “Colors of Time” was self-published in 2016, which was followed by the novelettes “La Verita (horror)” and “Jessie Sparks (Sci-fi)” in the same year. In his works, Cansevgisi is obsessed with “time travel”, “lucid dreaming”, “parallel worlds”, “alternate history” and “blueberry wine” and often combines them in weird combinations.